Get ready for Comunica2, the number-one International Social Media Conference that will be held on our campus on February 25 and 26.

The sixth edition of the conference will be hosted by the journalist Toni Garrido and the intense program will address the challenges faced in today’s Internet, with front line speaker such as international digital media icon Esther Vargas, who will talk about the current panorama of the new Spanish language digital media. We will also find out about the excellent dissemination work that the National Library is doing on social media, and reflect on how humor and satire are handled on internet, with entertaining speakers such as Dios tuitero (God on Twitter) or GerardoTC.

In addition, we will discuss social mobilization 2.0, with Change.org and Doctors without Borders; we will hear from young female Youtubers who are authentic social phenomena; we will listen to 2.0 poetry and talk to the people behind the social media accounts of major television series and more… all with the support of Fundéu- BBVA.

The Comunica2 program will address both scientific and professional issues, and will be rounded out with the reading of communications and workshops that will go more in-depth on specific issues.

And since in addition from taking advantage of having this fantastic conference on our campus, we also want to add value, this year we will once again hold a Popular Science workshop in Comunica2 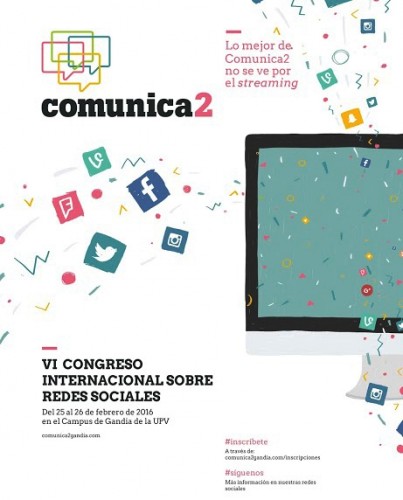 The event will also be attended by Ainhoa Goñi, Director of Communications at the CSIC, who, together with her team, won the 2015 Concha Garcia Campoy Journalism Award from the Academy of Sciences and Television Arts. In Comunica2, Goñi will lead the workshop “Instagram as a dissemination tool”, where she will share the knowledge she has acquired throughout her very interesting career.

The journalist started preparing the launch of CSIC in Social Media in 2010, landing with a splash on Facebook, Twitter and Instagram. And this expert in scientific and institutional communication wants to prove that science is anything but boring, She knows this because she has had a lot of fun along the way, for example, when NASA asked her to live tweet the launch of the last rover robot on Mars, Curiosity, on board the Mars Science Laboratory.

A BETTER FUTURE THANKS TO SCIENCE

Since its inception, the Campus Gandia of the Universitat Politècnica de València has opted for popular science: lectures and conferences, Science Week, workshops in schools, science journalism in collaboration with the Science Communication Unit of the UPV, audiovisual broadcasting through its own television show Telegrafies, social networks and this blog are examples.

We know that the popular science is one of the best ways to spread knowledge and ideas. Scientific knowledge, placed in the hands of society, can help to create a better, more efficient, sustainable and just future.

Since 2013, we have held popular science workshops in Comunica2, taught by recognized professionals, with whom we want to contribute to the training of science communicators. We did it with José María Herranz de la Casa, PhD in journalism and professor at the UCM in 2015, from whom we learned about dissemination and personal branding for researchers in the 2.0 era. Also with José Miguel Mulet, popularizer and researcher at the Polytechnic University of Valencia – CSIC, who introduced us to his way of seeing popular science on social media.

Great experts that we learned from and enjoyed. We expect the same from this workshop. We’ve already signed up; does anyone else want to be cool?