The UPV Polytechnic City of Innovation hosted the Tecniacústica 2015  conference on October 21st to the 23rd, where over 200 national and international experts presented their latest developments and debated the upcoming research challenges in the field of acoustics.

Among the many topics debated, the latest developments in noise control and insulation in buildings were addressed; new materials and acoustic devices; room design; acoustic analysis of recreational areas; virtual acoustics; or the preservation of the musical heritage of Valencia.

The conference, which is one of the leading international forums in the field of architectural, archaeological and virtual reality acoustics, is organized by the Spanish Society of Acoustics in collaboration with the virtual acoustics research group formed by professors from the UPV (including several from Campus) and UV.

One of the papers presented by researchers from Campus of Gandia was a comparative study of the noise levels from the N332 highway as it passes through Oliva, a town besieged by road traffic noise. “According to results from this study, the traffic flow through Oliva has increased about 50% since 1999,” said one of the study’s authors, Jesus Alba. “The noise levels are essentially the same despite the opening of new ring roads. They are 10 dB above the maximum levels permitted by law in every time period,” said Alba. 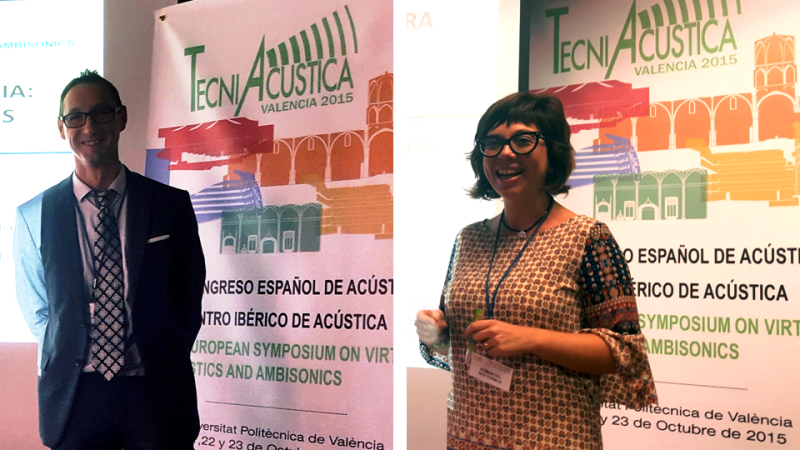 The same team from the Campus presented the first results of the WOOL4BUILD project, which aims to create new absorbent materials with sheep wool scraps

The a sizeable group of experts from Campus Gandia participated in the various presentations and papers presented during the three-day program:

In addition to everything highlighted above, it should be noted that the Scientific Committee of Tecniacústica 2015 was composed by Victor Espinosa and Victor Sanchez-Morcillo, both researchers from the Campus, among other experts in this field of study.

The scientific collaboration between the Campus of Gandia and Tecniacústica has been steady in recent years; in fact, in 2006, the Campus hosted the conference.

Finally, The Spanish Society of Acoustics has granted the Andrés Lara Award to Xavier Banyuls, graduate student in the Masters Degree Program in Acoustical Engineering at Campus de Gandia. This award that was given to Campus Gandia researchers in previous editions.