A graduate of Campus Gandia of the UPV has worked on the LIFE+Trachemys, promoted by the Generalitat Valenciana and funded by the European Commission through the LIFE funds. The aim of the initiatives encompassed in the European LIFE projects is to contribute to the implementation, updating and development of Community policies regarding the environment and nature conservation. In the case of the Valencian wetlands, the biodiversity is threatened by the invasion of exotic species such as Trachemys turtles.

According to data collected by the LIFE + Trachemys project, the Safor Marsh has a considerable overpopulation of Trachemys scripta elegans, also known as “red-eared sliders” that are given to children as pets and abandoned when they grow.

Sara Herrero, who has a Master of Science in Environmental Assessment and Monitoring of Marine and Coastal Ecosystems from the Gandia Campus of the UPV, collaborated on this project as part of her Master’s thesis, supervised by the Professors Domingo Vicente Domingo Estruch Fuster and Jesus Villaplana Ferrer. In her research, she conducted an analysis of the effectiveness of the methods used for the capture of exotic turtles in the wetlands of the Safor.

The presence of these turtles and their reproductive success are a threat to native species of turtles: “There is evidence that at the mere presence of Trachemys scripta, the European pond turtle (Emys orbicularis) abandon their ecosystems and do not confront them; for this reason it is essential to remove invasive species and offer indigenous ones a chance at survival,” explained the UPV graduate. For Sara Herrero, this is a very serious problem: “Besides being a cruel act to abandon any pet, it is irresponsible on the part of the owners; they think they are freeing their turtle but they are indirectly threatening a unique and delicate ecosystem.” 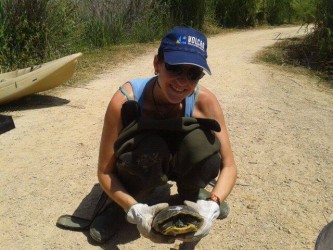 In her work, Sara Herrero has analyzed three methods of capture: traps (nets), floating bait traps and floating basking traps (where the species bask in the sin). According to the results, the pots prevent the captured turtles from escaping, but have the highest degree of mortality, so they have to be checked frequently; floating bait traps have great success with adult females, while floating basking traps have more success in young specimens. The researcher recommends the combined use of three types of traps in areas in which the species have been found to be breeding, this way both adult and young animals who have not had time to reproduce will be removed, and subsequently the population decline is more drastic. For Professor and researcher Miguel Rodilla, director of the Masters Program in Environmental Assessment and Monitoring of Marine and Coastal Ecosystems of the UPV, the wetlands have great ecological, hydrological and socio-economic value and that is why they study them in depth in the Masters Program.