Researchers at the UPV developed a pioneering project for the European Space Agency (ESA) aimed at achieving a significant reduction of noise in the vicinity of the launch pad during rocket launches.

To achieve this they are working on the design of new structures capable of deflecting sound in other directions, thus preventing direct reflection of sound incidents on the spacecraft. These structures are called sonic crystals and are formed by an orderly distribution of sound-scattering objects (such as cylinders or spheres) that have unique properties with respect to wave propagation, such as the inability to transmit certain frequency bands.

The UPV working group, coordinated by Víctor Sánchez Morcillo, Professor of Applied Physics and Director of the UPV Masters Program in Acoustical Engineering at Campus Gandia, has been working on the study of sonic crystals for other applications and their work now focuses on its use to mitigate noise in the aerospace context.

The levels of noise and vibration that are reached during take-offs are very elevated, almost like an earthquake or a volcanic eruption, with levels nearing 200 db, on top of high temperature reaching thousands of degrees that cause the combustion gases of the spacecraft. Up until now, the solution for mitigating the “bothersome” noise was to locate the launch complexes in remote areas so that the noise and heat emissions were tolerable, but this seems to be changing. 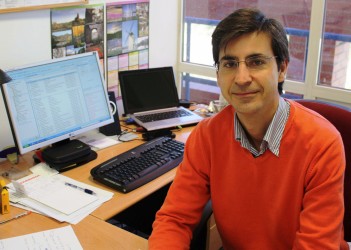 “While the orbiting technology is advancing very quickly, the methods for controlling noise during takeoff has advanced very little, partly because conventional techniques are difficult to apply in such a hostile acoustic environment. Our work aims to provide a solution to this scientific challenge,” says Victor Sanchez.

Funded by the ESA, the work of researchers at the UPV is still in its early stages. Should it prove successful, it will continue its development through the study of more realistic models – a scale model at first and if need be, a real launch pad, such as the ESA’s Ariane 5 and Vega, which are currently operational.

The project brings together researchers from three centers at the Polytechnic University of Valencia: The Research Institute for Integrated Coastal Zone Management (IGIC) at Gandia Campus, the University Institute for Pure and Applied Mathematics and the Physics Technology Center at UPV.