Despite the tremendous complexity of dental implantology, there is substantial margin for increasing the effectiveness of the job of the dentist. Marc Oller, a student in the Bachelor’s Degree in Interactive Technologies at Campus Gandia of the Universitat Politècnica de València, interning with the IVIO-UPV Chair, has focused his Final Degree Project (TFG, for its Spanish initials) on improving this task through the development of an augmented reality (AR) application for smartphones that helps guide the drills used by dentists. The TFG was titled “Development of an Augmented Reality Application to Aid and Guide Dentists during Implantology”. 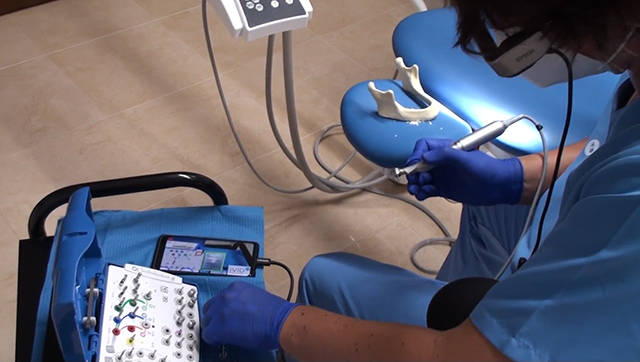 Dentists use a number of different dental drill bits during implantology, but the drill set used and the sequences will vary depending on the type of implants. To this end, Oller’s application connects augmented reality glasses (smart glasses) to Android OS smartphones to indicate which tool to use and when, with the option of using a voice assistant, while allowing the user to customize it and include dental drill bit sets from different manufacturers. In the words of research professor Fernando Boronat, supervisor of the TFG, “due to the large number of bits in each set and the tremendous variety among these, dentists need to consult the manual to find out which bit to use and when. This way, it’s not necessary.”

Test versions were developed in each stage of the project as new features were implemented. While the technical programming part and the laboratory tests were carried out at Campus Gandia, the test versions were used in a real life setting at the IVIO facilities until finalizing the prototype. Therefore, the app has been used by professional dentists and IVIO master’s students. IVIO Director, Joan Faus, was able to give his feedback, indicating pertinent improvements and corrections at each stage of development. “When each one of the features had been implemented and Fernando could see that they worked correctly, Joan Faus offered his opinion, suggested improvements, indicated the changes that could be made, what had to be done to improve it, or gave the go-ahead. After this was done, next came the voice assistant feature and once we had the go-ahead, different sets of drill bits were incorporated into the application,” according to Oller. 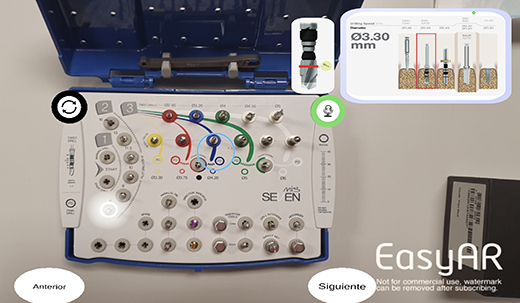 This close collaboration has ensured that the application is adapted to the real needs of a dental clinic, as reflected in the usability and user experience questionnaires submitted. The results were so positiver that it will now be used in real work settings, as well as in the dental implantology masters at IVIO.

These many months of development saw the achievement of an application with high potential, overcoming a number of challenges, such as getting the smartphone to detect the external camera of the AR glasses as its own, instead of the camera’s own device. According to Oller, “The project has very solid footings. It’s in the final prototype stage. which I presented in the TFG, and some features can still be developed, but it has tremendous potential. I’ve been able to demonstrate its utility both in educational and professional settings.” One of the key aspects to work on next is evaluating the different models of smart glasses to determine the most comfortable ones for dentists.

AR has tremendous potential in the field of dentistry, since it offers so many other advantages. Chief among these advantages, according to Boronat, is that “during the implantology, you’re able to see an image of of the patients X-ray to determine the angle the implant should be placed , or check their medical records.”

Undoubtedly, Marc Oller‘s TFG will be a great cover letter for his short-term professional aims: to apply for a job in a private sector business. In the future, he would like to have his own startup and develop an application as powerful as the one he has developed with the IVIO-UPV Chair.