From December 27 to January 9, La Caixa Foundation’s CosmoCaixa Barcelona Science Museum hosted the exhibition titled “Ultrasons, de la natura a la medicina” (Ultrasounds, from Nature to Medicine), organized by the Vall d’Hebron Hospital. The IVIO-UPV Chair of the Gandia Campus took part in the show by providing advice and assistance for the preparation of the different contents exhibited and also produced a series of informational videos.

Although ultrasound has always been key to the survival of many species, humanity only learned of its existence a few centuries ago; its medical application is even more recent. It is currently undergoing extraordinary developments, which is enabling improvements in the quality of patient care. The team from Vall d’Hebron Hospital, organizer of the exhibition, is an authority on the benefits of ultrasound. The UMIL (“Ultrasound Medical and Industrial Laboratory”) research group, led by Francisco Camarena, director of the IVIO-UPV Chair, is in close collaboration with this hospital organization. Dr. Xavier Serres, an eminent Radiologist and head of the exhibition on behalf of the Vall d’Hebron Hospital, invited the Chair to participate and share its extensive experience in this area. In the words of Camarena, it was a “unique opportunity to share information about a technology that we owe so much to as a society.” 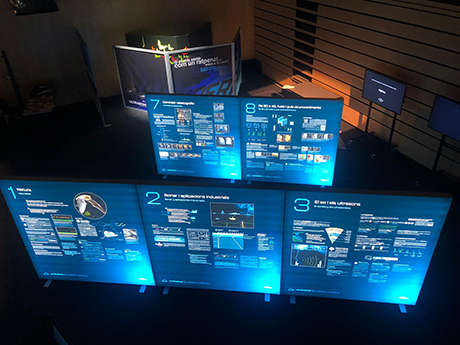 Noé Jiménez, a researcher at the Chair, was appointed scientific advisor to the Vall d’Hebron Hospital for the development of content that could explain “in a simple and direct way how ultrasounds appear in nature and how humans use them in medicine.” Out of all of the content, it is worth highlighting the four informational videos produced by Jordi Domenech, an intern at the Chair for his Master’s Degree in Digital Post Production at Campus Gandia, and who worked on this project under the coordination of Jiménez. The videos illustrate how other animals also use ultrasound for their needs, such as bats or dolphins, which use it to navigate in the dark. Its use in diagnosis and medical treatment is also explained through techniques such as ultrasound scans or the cutting-edge modality currently used at the Vall d’Hebron Hospital to treat tumors without the need for radiation or surgery. The experience of the staff of the IVIO-UPV Chair was depicted in the film pieces, which were concise, precise and didactic in order to be shown at an exhibition aimed at the general public.

The IVIO-UPV Chair places great value on its collaboration with the Vall d’Hebron Hospital and the the other institutions involved, who defined both the general concept of the exhibition and the details of the contents through various meetings. As for the video production, Domenech highlights the fluid communication: “they have been there day and night, giving me their support and helping me out with any issue I had questions about.” In addition, Camarena says that the Chair feels proud “to have the recognition from our collaborators to participate in the exhibition. It is a sign that we are doing a good job that transcends not only nationally, but also internationally.”

“Ultrasons, de la natura a la medicina” was visited by more than 6,000 people. In Francisco Camarena’s opinion, this success demonstrates that science mattersa. Also appealing to the role of the profession in society, he adds that “scientists must help to ensure that it isn’t relegated to just a few people.” The good reception of the exhibition in Barcelona may encourage extending it to other towns.