The Master’s Degree in Acoustic Engineering (MAE) of Campus Gandia of the Universitat Politècnica de València (UPV) and the Master’s Degree in Acoustics and Vibrations (MAV) of the Austral University of Chile (UACh) have signed an International Double Degree agreement that will allow eight selected students obtain both degrees. The agreement will allow a maximum of four students from each institution to participate in the double degree or exchange program annually. The participating students will be nominated by their home university; the agreement has already entered into force.

Jesús Alba, director of Campus Gandia and researcher in acoustics, points out that the scientific collaboration between both institutions, specifically with the UACh Acoustics Institute, has been ongoing for more than 10 years and has helped to establish this agreement: “Thanks to this we can expand on common research lines and incorporate talented students to these projects, as well as open new doctoral thesis research lines. It is therefore a formula for increasing the joint potential as acoustics research centers,” said Jesús Alba. The Director of the MAV program at the UACh, Jorge Arenas, contends that the agreement will increase student mobility within the program and joint research on related issues. “This is a big step towards the internationalization of the degrees,” he explained. 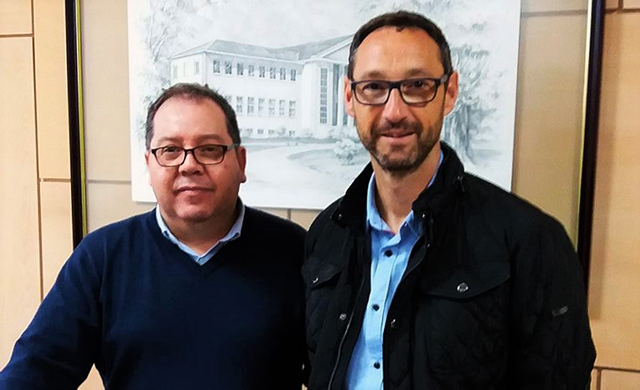 It should be noted that the MAE of the UPV has an outstanding record of preparing research personnel in the field of acoustics, as evidenced by the high number of young researchers awarded by the Spanish Acoustic Society (SEA, for its Spanish initials) for their work in successive editions. 2018 saw all previous records broken, with five young scientists receiving SEA awards.

The UACh Acoustics Institute is the academic leader in Acoustics and Vibrations throughout Latin America. To date, more than 400 professionals have graduated, working in Chile and in different countries in America, Europe and Oceania. The Institute has organized numerous international conventions, including the 5th Ibero-American Acoustics Convention in Santiago in 2006 and the IX Convention in 2014 in the city of Valdivia. Several students and researchers from Germany, Spain, France and the United States have done research residencies and postdoctoral fellowships. At present, the Institute participates in five active international agreements signed with the Federal University of Santa Caterina in Brazil, la Universidad Politécnica de Valencia, Spain, the Technical University of Berlin, Germany, and Auburn University, Alabama and Virginia Tech. in the United States, which have allowed student and faculty exchange, and the initiation of joint research projects. Since 2014, the Institute has taken part in 8 research projects, 3 funded by CONICYT, 1 project funded by ICTAS/Virginia Tech, 1 project by the Ministry of the Environment and 3 funded by the Research Directorate of the UACh.

More and more foreign students have applied for admission to the academic programs offered by the Institute in the last three years, attesting to the high quality of the Acoustics Institute. Among them are students from Ecuador, Colombia, Bolivia and Mexico. 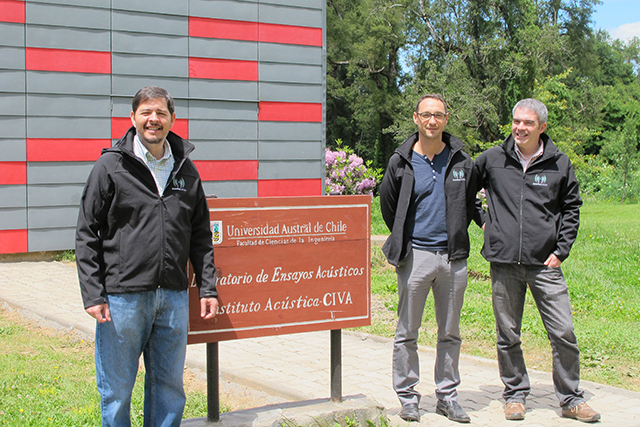 The academic program of both master’s degrees have common subjects, such as Room Acoustics or Noise Pollution. But, in addition, they have complementary contents: the MAV offers courses in vibroacoustics and in specific numerical methods that are not addressed in the MAE. For its part, the MAE offers courses in underwater acoustics and electroacoustic systems, which complements the contents of the MAV. “The students who do the double degree will see their academic experience enriched. In addition, they can enter a doctoral program, with joint teaching staff,” explains Jesús Alba.

FIRST DOUBLE-DEGREE AGREEMENT OF THE FCI

For the director of the UACh Graduate School, Enrique Suárez, this agreement constitutes a milestone, since it is the first double degree agreement obtained in the Postgraduate programs of the School of Engineering Sciences. “The partnership agreement with the UPV is also important for the engineering innovation project, Innoving 2030, in the UACh School of Engineering Sciences, since the Spanish university is one of the three institutions of reference for this project, due to its experience in business relationships. These aspects can be incorporated into our Master’s Degree in Acoustics and Vibrations,” explained the UACh professor.