“All the Spanish researchers I have worked with have been excellent,” stated Jean-Pierre Sauvage, Nobel Prize in Chemistry, before giving his lecture “Molecular Machines: from Biology To Chemistry”, on March 13th at Campus Gandia of the Universitat Politècnica de València (UPV). “All of the Spanish scientists?” “Yes, really, all of them. Some of the best people I’ve had on my team. I’m not saying this because I’m in Spain,” the researcher points out. 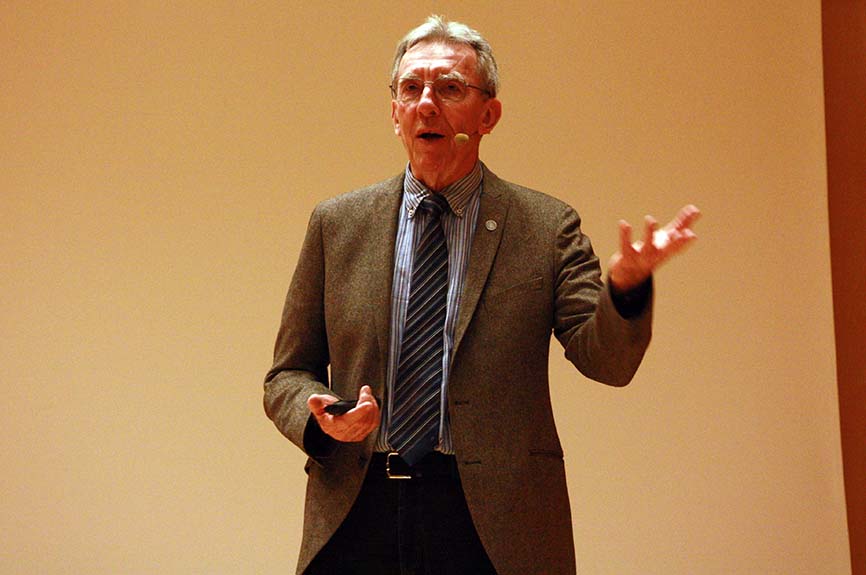 Jean-Pierre Sauvage at the conference at Campus Gandia UP

Jean-Pierre Sauvage received the Nobel Prize in Chemistry in 2016, along with James Fraser Stoddart and Bernard Lucas Feringa, for the synthesis of “molecular machines”, a discrete number of molecular components that respond to specific stimuli (a light signal, a thermal or electrical impulse) in a controlled manner and can reproduce the quasi-mechanical movements (rotation, translation and contraction) in a nanometric scale. One day before the conference in Gandia, he was awarded an honorary doctorate by the UPV and he will give six talks during his tour of the Valencian Community.

Jean-Pierre Sauvage is convinced that science can provide solutions to the greatest problems facing humanity, from pollution to curing diseases, through improvement in communications, development of E-textiles… “Basic science is the source of everything,” he explains. With this said, Sauvage believes that Spain is missing out on opportunities: “The lack of options for Spanish researchers is a great waste of talent. The country would have much to gain if its scientists could carry out their careers here,” he states categorically.

Jean-Pierre Sauvage gave his lecture at Campus Gandia of the UPV to 180 people, among whom were students from 2nd year Baccalaureate of the IES María Enríque and the IES Veles e Vents from Gandia, a young audience that he loves to talk to and transmit his passion for science. When asked by a student why he decided to devote himself to developing “molecular machines”, Sauvage said, “The most exciting thing that can happen to a scientist is having to create something new, having a challenge. And once you have made the discovery you want to continue developing it, search for applications…”.

The “molecular machines” developed by Sauvage and his team are giving rise to very promising applications. “New materials such as smart films have already been created. In medicine in the short term, molecular machines will be able travel in the bloodstream to transport drugs to a specific target and help cure diseases. Another application being worked on are signal-processing systems that could multiply the power and speed of existing ones many times over,” explained the scientist. For Jean-Pierre Sauvage, having fun and feeling passionate are the keys to positive outcomes in science, as well as being able to work with a team that has good personal relationships, even friendships that last for years.