The Spanish Acoustic Society has awarded the 2017 Andres Lara Young Researcher Award to Manuel Parrilla Navarro, who holds a Bachelor’s Degree in Telecommunications Systems, Sound and Image Engineering and a Master’s Degree in Acoustic Engineering from Campus Gandia of the Universitat Politècnica de València. The Prize was awarded during the 2017 Tecniacústica International Symposium, where 33 of the 188 papers presented on acoustics were authored by researchers at the Campus Gandia. 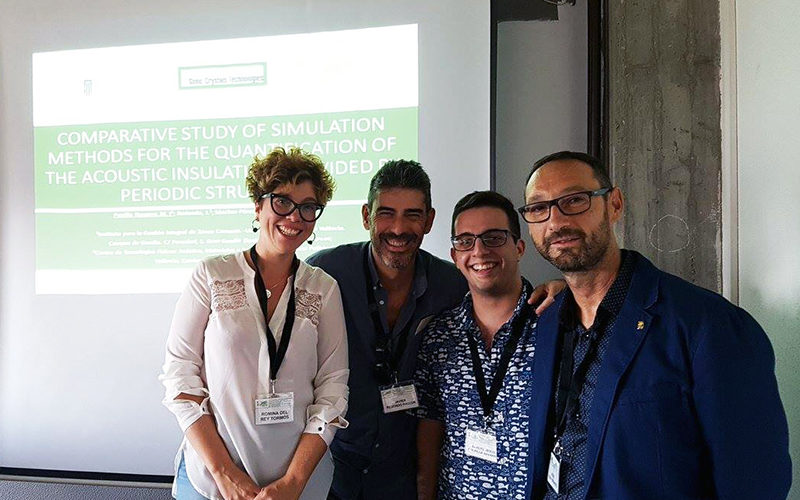 The award-winning paper is Manuel Parrilla’s Master’s thesis, titled Comparative Study of Simulation Methods for the Quantification of the Acoustic Insulation Provided by Periodic Structures, and was supervised by Javier Redondo, research professor at Campus Gandia. The study is one of the activities undertaken by the UPV’s Sonic Crystal Technologies research group. “This group is developing acoustic barriers based on periodic structures through genetic-algorithm based optimization. These optimizations require a prediction method that is as efficient and precise as possible,” explains Manuel Parrilla.

Also during the Tecnicacústica 2017, the Luis de Camoens UC3M Chair awarded the prize for the best scientific-technical communication presented by a young researcher to María Campo Valera, who holds a Master’s degree in Acoustic Engineering from Campus Gandia and is currently working on her PhD. 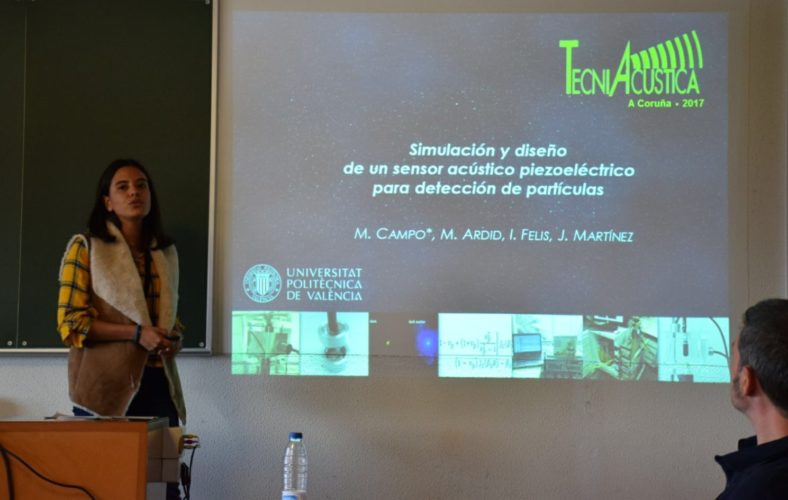 The communication presented by María Campo is titled “Simulation and Design of a Piezoelectric Acoustic Sensor for Particle Detection”. According to the researcher, the bubble chambers used in dark matter detectors use piezoelectric sensors to detect and discriminate the acoustic signals emitted by the bubbles. Bubbles are generated from the interaction of particles with the superheated fluid present inside said chamber.

The Acoustic Particle Detection Research Group that María Campo is a member of, has developed a particle detector model whose acoustic sensors are stuck on the outer walls of the chamber.

“In order to understand the behavior and optimize sensor operations, analytical and numerical models are developed, as well as experimental tests for its characterization. The results of these studies provide a design criteria for the proper construction of these sensors in future bubble chambers for the detection of dark matter,” says the scientist. At present, the sensors are located in Milan for the calibration phase with the MOSCAB detector.

RECORD OF THE ANDRÉS LARA AWARDS

On several occasions, young researchers from the Campus Gandia have received this Young Researchers award, as can be seen in the website history.