Researchers at the Universitat Politècnica de València have started a project whose objective is to update the environmental flow regime of the River Serpis River, promoting the conservation of native species against invasive species and taking into account different climate change management scenarios, as well as the cost of these alternative regimes. The research project counts with the the support of the Biodiversity Foundation of the Ministry of Agriculture and Fisheries, Food and Environment, and is directed by Francisco Martínez-Capel, professor of the Bachelor’s Degree in Environmental Sciences at Campus Gandia.

The project features a multidisciplinary team composed of members of the Research Institute for Integrated Coastal Zone Management (IGIC) and the University Institute for Research in Water Engineering and Environment (IIAMA). It also incorporates the external collaboration of the Department of Zoology and Physical Anthropology of the University of Murcia (UMU).

The project, titled Adaptation to Global Change: Integrated Management of the Environmental Flow Regime for the European Eel and Valencia Chub Habitat Against Invasive Species, held its inaugural meeting at Campus Gandia 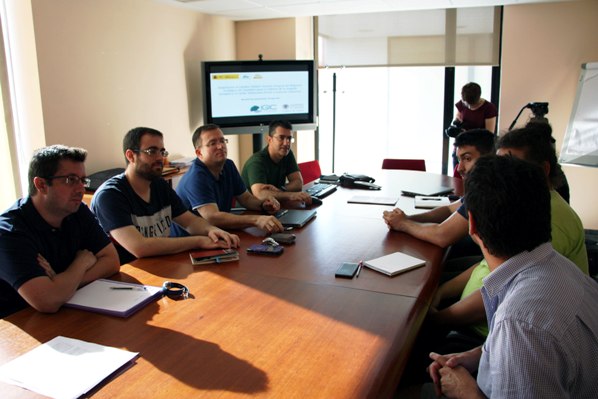 IMPACT ON THE FUTURE OF WATER MANAGEMENT AND ENVIRONMENTAL FLOWS

According to UPV researcher Francisco Martínez-Capel, the project will represent an important advance in environmental flows and knowledge of the future water management possibilities in the medium and long term.  “Thus far, environmental flow regimes have been limited to ensuring a minimum flow, at any time, to obtain an acceptable amount of habitat for the most representative native fish species. Unfortunately, these regimes have been obtained without taking into account that they may well promote the presence of invasive species, with the consequent ecological damages that these entail.  For example, the fact that the minimum flows occur in winter and the largest flows in summer, due to irrigation needs, is detrimental to certain species in these Mediterranean rivers.

According to the professor, in some cases the urgency to approve the river basin plans, coupled with the difficulty of observing and gathering data from some species of fish, made the information very limited for some vulnerable and critically endangered species, as may be the case of the Valencia chub (Squalius valentinus) and the European eel (Anguilla anguilla).

Project participants point out that in recent there have been substantial improvements in techniques used to study the ideal habitat for species, which far exceed those that were used to shape the current legislation. “The environmental information together with these new techniques can determine flow regimes that are very different from those obtained in the past,” says Martínez-Capel.

In light of these developments, the revision of the environmental flow regimes on the part of the scientific community is imperative, especially when all the climate change predictions indicate a reduction in water resources, with the consequent economic damage.

To achieve this ambitious goal, the habitat requirements for the most emblematic species in the River Serpis River, including the European eel, will be studied and analyzed using modern mathematical modeling techniques. “To determine the habitat evolution with different flows, we will use adjusted models to evaluate the available habitat and that adapt to an exact section of the river,” explains Rafael Muñoz-Mas, IGIC researcher

“In parallel, a hydrological simulation and analysis of the water resource management system will be carried out in order to understand the operation of the Serpis basin, as well as the agricultural or urban demands it currently supports. This step will allow us to deduce different flow regimes under different management alternatives, climate change scenarios and possible changes in crops and agricultural demand,” says IIAMA researcher Manuel Pulido. The impact of these alternative flow regimes on the habitat available for native and invasive species, their degree of competition for habitat, and their cost will allow a more rigorous deduction of a new ecological flow regime for the River Serpis.