Oriol Marimon Garrido (from the University of Barcelona) and Helena Gonzalez Buron (from the Institute of Research in Biomedicine) are the scientists/comedians that are set to headline a stand-up comedy show in Gandia with five science monologues, followed by a Q&A to clarify some of the concepts brought up in the monologues, “or any other science-related questions they may bring from home,” explains Oriol.

Marimón and González are two of the 17 members that make up BigVan, Scientists on Wheels, an organization dedicated to scientific humor. According to them, “it’s easy to break down science for people through laughter. We go to high schools, middle schools, elementary schools and other learning institutions to encourage young people to get into in science,” they continued to say. As part of the XI Science Week, Campus Gandia of the Universitat Politècnica de València will host one of their shows on Friday, November 20th at 12:00pm, with free admission.

“In addition to explaining the research that’s going on in the laboratories in Spain, our goal is to encourage the curiosity in science and technology in our audience,” they commented. “Laughter is a totally universal language. Everybody loves to laugh and as scientists and popularizers, it lets us establish a common language with our audience, creating two-way communication that lets us deliver science to the layman, encouraging their curiosity about various topics in the fields of biology, mathematics, chemistry and geology,” says Helena. 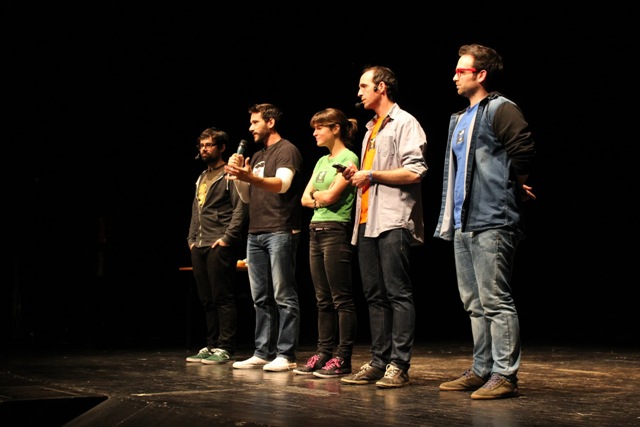 BigVan, Scientists on Wheels, started in FameLab, a communications competition held since 2007 in more than 25 different countries, designed to engage and entertain by breaking down science, technology and engineering concepts into three-minute presentations. They first compete on a national level and the winners from each country compete in the final international competition. Spain did not enter the competition until 2013 and it was in the national semifinals of the first edition that a group of scientists and technologists decided to form a group to continue disseminating science through the same three-minute science monologue format of FameLab. The result was ‘The Big Van Theory’.

Helena and Oriol were finalists in the 2014 edition of FameLab, where they gave a presentation on the importance of rest for cell regeneration and the key role of cooperation and communication in the evolutionary path, among other things.

DISSEMINATION AS A TOOL FOR CHANGE

The people behind BigVan, Scientists on Wheels are convinced of the social and political role of science popularization: “the politicians need to understand that we should not disinvest, but rather invest in science. But this requires the public to be aware of the importance of science and to choose representatives that are attuned to these issues. Therefore, the popularization of science is very important because it brings science to closer society.”

According to the young researchers in this group, the Spanish Government has continually reduced funding for science and research in recent years, leading to the precarious situation of many laboratories and institutions, whereas in Europe and the international community, the process is the opposite. “We scientists in Spain have rolled up our sleeves and have started to work on high quality projects to attract European and international investors and continue researching this way,” they conclude.