For the fourth year in a row, Campus Gandia of the Universitat Politècnica de València, the CEIC Alfons El Vell and the Universitat de València unite their scientific and popularization capacities to coordinate the Gandia Science Week from November 16th to 20th, with activities aimed at promoting interest in science and technology and helping to bring it closer to the public. 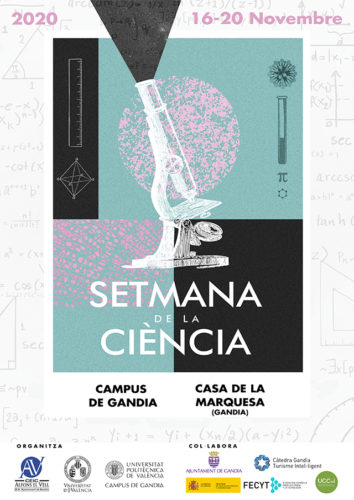 This edition marks the 16th one organized by Campus Gandia, given that the initiative shares the same commitment to science and its dissemination that has governed the Campus since its inception.

On Monday 16th, at 12.30 pm, the Inauguration of the Gandia Science Week 2020 will take place with the presentation of the mural dedicated to Clara Grima, at the Campus Gandia Library (UPV).

Clara Grima is a mathematician, scientist, disseminator and writer of popular mathematics books. Her book, Mathematics Watches Your Health, offers an insight into mathematics as a powerful tool for understanding how disease spreads and how we can stop it. Her simple and beautiful models lead us to indisputable and objective conclusions about the development of infectious diseases and the importance of vaccination.

Borja and Clara Grima allow lay readers to understand the potential of mathematics in the control and prevention of epidemics in an entertaining and accessible manner. It consist of four initial chapters that go through concepts such as graph theory, game theory, functions and differential equations, with a novel perspective and a great sense of humor. The aim is “to fill our backpacks with the minimum necessary knowledge” to be able to understand and address the development of diseases with mathematics.

Clara Grima will be at the fore of this opening ceremony, in which she will give a short talk. In the evening, at 7:30 p.m., she will initiate the daily conferences to be held at the Casa de la Marquesa de Gandia with a fuller and more complete talk about this book.

The mural is the work of the urban artist Flug, a graduate of the Universitat Politècnica de València. This is an initiative that started two years ago with the aim of giving visibility to relevant scientists and disseminators through murals and the inauguration of laboratories named after them. 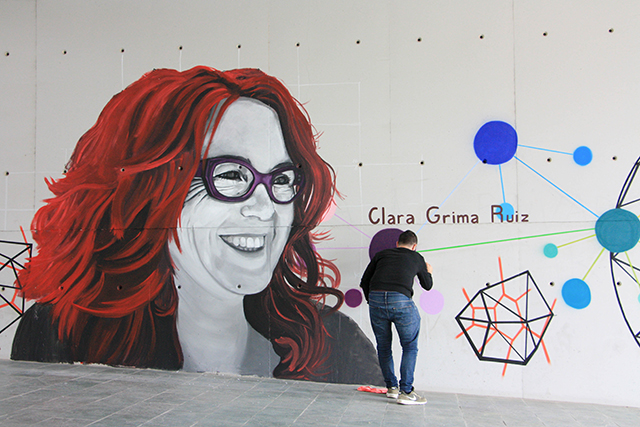 Four workshops will be directed by Professor Víctor García and given by students of the Bachelor’s Degree in Environmental Sciences at the Campus, aimed at enhancing the interest and active participation in scientific practice among young people. Elementary school students from the schools of Gandia will participate in these workshops, which will take place at the Casa de la Marquesa de Gandia, from Tuesday to Friday, offering a space for experimentation and scientific creation. 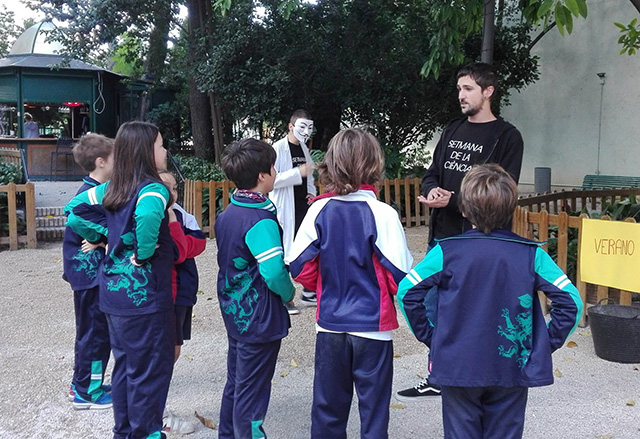 Despite the current health situation, scientific activity does not stop and is conducting especially relevant work these days. With this objective, the program proposes five lectures on topics of scientific and technological interest offered by experts in the field. From mathematics to tourism, passing through the universe, the lectures will take place at the Casa de la Marquesa de Gandia, from Monday to Friday, at 7:30 p.m., with free admission to the general public with prior registration. 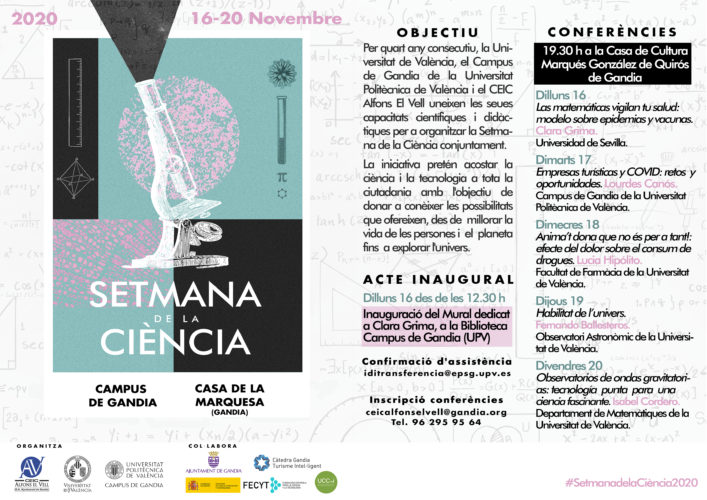 Cheer up girl, it’s not that bad!: effect of pain on drug use. Lucia Hipólito. School of Pharmacy of the Universitat de València.

May math be with you!

A selection of books, both physical and digital, on recreational mathematics and mathematical dissemination on the occasion of the inauguration of the mural dedicated to Clara Grima. The exhibition will be located throughout the month of November in the hall of the Campus Gandia Library (UPV) and at: https://polibuscador.upv.es/primo-explore/collectionDiscovery?vid=bibupv&collectionId=8198372770003706

Gandia Science Week 2020 is sponsored by the Gandia Smart Tourism Chair, with the support of the Gandia City Council and the Chair for Scientific Dissemination of the Universitat de València, among other organizations.