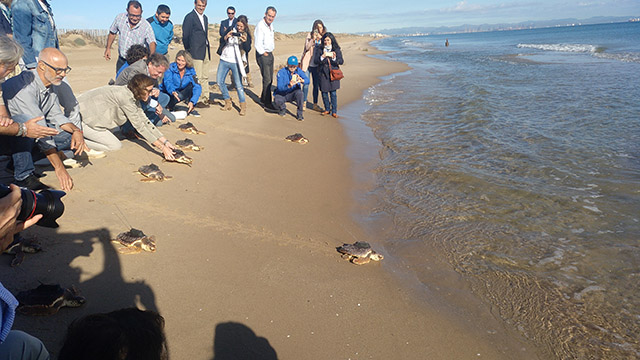 In recent decades, the preservation of the loggerhead sea turtle or Caretta caretta has raised great concern due to the escalation of environmental threats, many of them caused by the negative impact of human activity on the marine environment. In addition to the effects of marine pollution, specifically the presence of marine debris consisting mainly of plastic debris that turtles mistake for food, other dangers such as fishing or maritime traffic also pose health risks to these species.

The conservation of the loggerhead sea turtle and other marine species in Mediterranean waters depends on understanding and proper management of marine ecosystems. In 2015, in keeping with this objective, Campus Gandia of the Universitat Politècnica de València was added to the existing lines of research on Mediterranean sea turtles carried out by the Marine Zoology Unit of the Cavanilles Institute of the Universitat de València. The Campus is providing innovation with the application of new technologies to increase the understanding of these species and the threats that affect them. These lines of research are part of various scientific projects in which other scientific institutions, conservation associations, NGOs, and the Ministry of Agriculture, Rural Development, Climate Emergency and Ecological Transition of the Generalitat Valenciana also participate.

In the research carried out at Campus Gandia under the leadership of Eduardo Belda, the turtles are being tagged and monitored via satellite in order to establish strategies for their protection. By tagging the turtles with satellite transmitters, it is possible to monitor the long journeys and migrations carried out by these specimens, enabling the study of their behavior and habitat use, as well as understanding the survival of captive-bred and rehabilitated specimens. This was the case with the la tortuga Lola (Lola the turtle), the first rehabilitated juvenile loggerhead turtle that was monitored after being tagged and released. 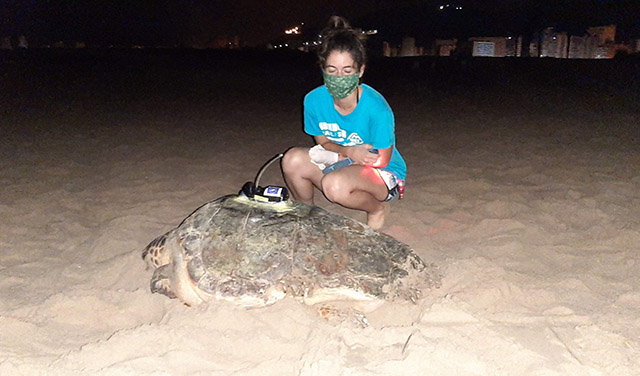 Currently, within the framework of the European LIFE INTEMARES project, the Campus Gandia collaborates in the monitoring of young turtles born on our coasts and in the monitoring of nesting females. This is the case of the turtles Mascletà and Victoria, two specimens tagged with satellite transmitters after spawning this summer on the beaches of Tarragona and Cullera respectively. Thanks to the tagging and monitoring of these turtles, it has been possible to detect new nesting attempts, facilitating the activation of protocols for the protection of the turtles and their eggs.

You can follow the turtles on the webpage https://eucrante.org/siguiendo-tortugas, where you will find the updated locations of Mascletà and Victoria, among other turtles.

SPAWNING SITES IN THE MEDITERRANEAN

Female loggerhead turtles have a philopatry tendency, that means that they return to the beach where they were born to spawn. However, since the early 2000s, loggerhead turtle spawning sites have begin to be detected off the western Mediterranean shores. Although the causes are unknown, this phenomenon is associated with the increase in sea surface temperatures in spring and summer, and in terrestrial temperatures, offering better thermal conditions for nesting.

Most of the nesting events have been recorded on tourist beaches, a fact that poses a risk to hatchlings and eggs, requiring more planning for these events and the relocation of the eggs to safe incubation sites.

Subsequently, it is just as important to understand the oceanic dispersal and survival rates of loggerhead hatchlings in their “lost years”, that is, the period of time that elapses between their birth and entry into the sea, and their return to coastal waters as large juveniles. Few studies have explored the behavior of young turtles in this period. However, advances in satellite technology have enabled research in this field. 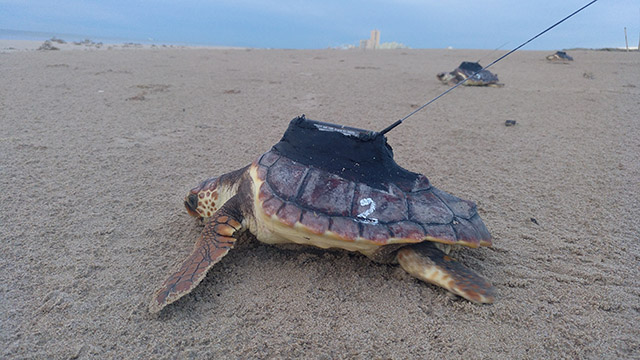 The loggerhead sea turtle is the most common species of sea turtles found on our coasts. It is a vulnerable species cataloged as “in danger of extinction”, included in the Red List of Endangered Species of the IUCN, International Union for Conservation of Nature since 2015, as well as considered a priority species under the Habitats Directive.