Maite Sebastiá and Javier Estornell, experts in Environmental Management and Remote Sensing at Campus Gandia of the Universitat Politècnica de València, have collaborated with researchers from the School of Marine Sciences at the Universidad Autónoma de Baja California (Mexico)  in a study that analyzes the monthly turbidity pattern of the Albufera lagoon.

The project began during Maite Sebastiá‘s postdoctoral stay at the Universidad Autónoma de Baja California (UABC), in the POPEYE group that specializes in coastal oceanography and remote sensing. Maite has a PhD in Environmental Sciences and is a specialist in Monitoring Coastal Ecosystems. The objective of the stay was to apply remote sensing monitoring to the Albufera de Valencia, a coastal lagoon that faces an important eutrophication problem.

The eutrophication is due to the supply of nutrients, mainly nitrate and phosphorus, which can produce an imbalance in the system and change the composition of phytoplankton. The eutrophication of the Albufera is an old problem that dates back to the 1960s.  From then on, the effects of human activity began to become evident with the progressive degradation of the biodiversity of the system, shifting from a clear state to a turbid stable state that was consolidated in the early 1970s.

But in recent years, Paloma Mateache, Director of Conservation at the Albufera Natural Park, and María Sahuquillo, official in charge of the Valencian Government’s Quality Monitoring program, have expressed their concerns about the considerable deposition of sediments that are threatening the lagoon with clogging. In this regard, remote sensors can provide information about turbidity patterns, which in turn would indicate the areas most likely to accumulate sediment. At these meetings held between the research team and the park’s technical team, the decision was made to study turbidity patterns in greater depth. Jesús Aguilar from UABC was in charge of developing and applying the methodology.

In order to monitor the lagoon, the research team used images from the European Space Agency’s Sentinel-2 satellite and compared them with in situ data from the monitoring program of the Environment General Subdivision of the regional government. Given the high spatial complexity and the varying water quality, remote sensing is the only way to obtain a synoptic view of the entire lagoon. The results obtained allow the researchers to define the seasonal pattern of turbidity and chlorophyll a (an indicator of the phytoplankton biomass) and to identify the areas of the lagoon with the most anomalous values, providing relevant information for the management of water resources. 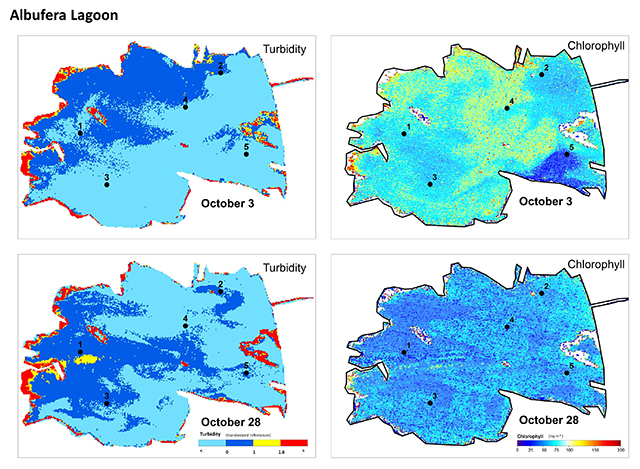 The Albufera lagoon is surrounded by an extensive agricultural area primarily used for rice cultivation and connects to the Mediterranean Sea through three floodgates. As Maite explains, “The local water council controls the hydrological cycle to meet to the needs of the rice crop. High turbidity periods are linked to higher water residence time and closed floodgates.” However, precipitation and wind also play an important role in the spatial distribution of turbidity. “During storm events, phytoplankton and sediments are discharged to the sea, if the floodgates remain open.” The rice harvesting season, when the floodgates are open, coincides with the beginning of the rainy period. Closing the floodgates during the rain events can have several negative effects both for the lagoon and for the receiving coastal waters and ecosystem. Non-discharged solids may accumulate in the lagoon worsening the clogging problems, and the beaches next to the receiving coastal waters will not receive an important load of solids to nourish the ecosystems. This demonstrates the importance of conscious management of the floodgates.

Coastal lagoons are transitional ecosystems between inland and coastal waters characterized by high spatial and temporal variability due to both natural intrinsic factors and anthropic pressures. The variations resulting from the irrigation system through the control of the hydrological cycle or from urban pressure through the discharge of wastewater cause serious environmental problems that make coastal lagoons one of the most endangered ecosystems.

The Albufera Natural Park is one of the most representative and valuable coastal wetlands in the Valencian Community and the Mediterranean basin, and holds several protection figures at both a national and international level, such as the Spanish Natural Park, Special Protection Areas (SPAs) for birds, Sites of Community Importance (SCI)s and Ramsar Site. In addition, some parts of the area have also been declared as “Flora Micro-reserve” and as “Fauna Reserve”.