Sara Suárez Almiñana, an Environmental Science graduate of the Universitat Politècnica de València (Campus of Gandia), has won the third prize in the CEMEX – Sustainability UPV Awards, in the category of Master’s Thesis related to sustainability and the environment. The Master’s thesis by Sara Suárez, titled “Habitat Selection Guilds and Habitat Suitability Modelling for the Fish Community in the Upper Cabriel“, was supervised by Campus Gandia professor, Francisco Martínez Capell, who is also a professor in the Master’s Degree program in Hydraulic Engineering and Environment of the UPV. Sara Suárez enrolled in this master’s degree program after finishing her undergraduate studies in Environmental Sciences.

OBJECTIVE: PREVENT THE DISAPPEARANCE OF SPECIES

Sara Suárez’ Master’s thesis focused on identifying the habitat requirements of the endemic species of the Upper Cabriel to aid in the adoption of management measures and prevent the disappearance of these species. Among them are the Jucar river Parachondrostoma arrigonis, the common trout, barbel and Valencian chub, as well as an invasive species, the goby. However, the most threatened species is the Parachondrostoma arrigonis, an endangered species, “which very little is known about their customs and whose already small population is diminishing,” stated the expert. 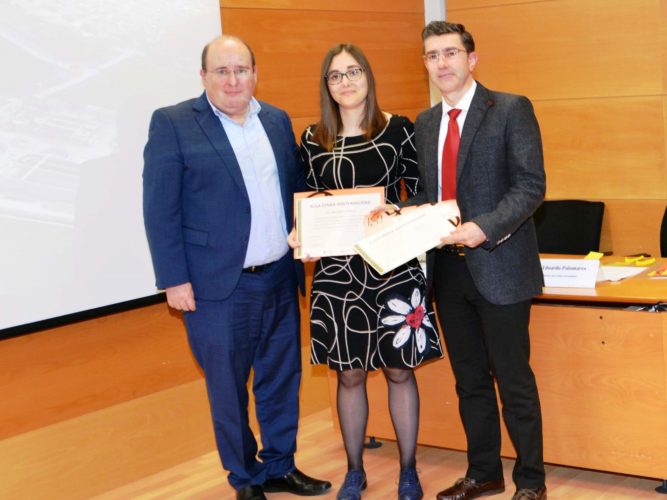 According to Sara Suárez, the project arose from the need to preserve native fish in the face of the many impacts that they have faced and continue to face, largely due to human activity, such as the construction of barriers, extraction of flows and contamination of the rivers.”If to this we add the possible effects of climate change, the situation gets even worse,” according to the Environmental Scientist. “According to the leading studies, temperatures in the East of Spain will tend to increase and precipitations to decrease, especially in inland areas of the basin, where the upper basins of the rivers are located, which may lead to a dramatic decrease in the river flows. For these reasons it is essential to introduce new management measures to avoid the disappearance of endangered species,” explains Sara Suárez.

According to the Environmental Scientist, several underwater fish-counting campaigns were carried out in each habitat as part of the study. The different species were subsequently classified in three guilds related to the habitat variables by means of statistical ordination, classification and modeling with neural networks. In addition, the positive or negative influence of these variables on the average density of individuals in each guild was obtained.  “The importance of this classification is that guild-based management allows threatened species to be reintroduced in places inhabited by species of the same guild, in addition to serving as an guideline for future studies of ecological flows,” says Sara Suárez.