José Ignacio Herranz, head of the Bachelor’s Degree in Telecommunication, Sound and Image Systems Engineering at Campus of Gandia of the Universitat Politècnica de València, is the author of a leading research paper that improves the performance of antennas and allows faster data transmission in next-generation communications systems, such as the ones installed on high-speed trains, aircraft or ships. Other applications of this conceived group of antennas will be the next generation of meteorological satellites and, in the near future, the 5G mobile telephone technology.

During the course of this project, the scientist José Ignacio Herranz, a member of the iTEAM research institute, took part in the LOCOMO project (Low cost and compact Ka-band mobile satcom terminal), financed by the ARTES program of the European Space Agency, where he collaborated with leading European companies in the field of on-the-move satellite communications. “The aim of this project is to provide broadband services in areas that are not covered by terrestrial cellular networks, where access to information is restricted to communications satellites: remote areas, conflict situations, areas affected by natural disasters, ships, planes … “, explains Herranz. Thanks to this research, the cost of the necessary terminals, which is hundreds of thousands of euros today, can be reduced by up to 80%. 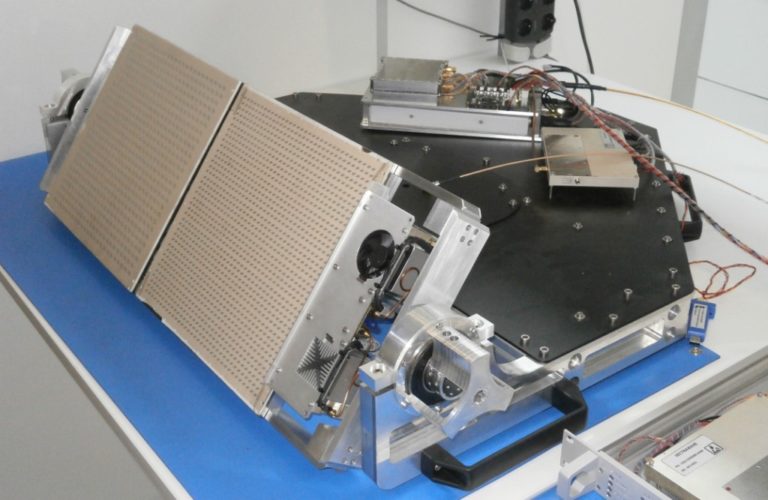 José Ignacio Herranz’s research is reflected in his doctoral dissertation “Analysis and Efficient Optimization of Waveguide Slot-Arrays”, supervised by Alejandro Valero. This thesis obtained one of the Extraordinary Doctorate Awards granted by the UPV in 2017.

“We have created our own software to design antennas, analyze their performance and automatically develop them in just a few minutes. This type of simulation software exists for smaller, commercially licensed antennas, but it is not effective for large antennas,” explains Herranz.

The results of this intensive research work have been validated experimentally by the manufacture and measurement of prototypes related to the actual deployment of telecommunication systems. In addition, this doctoral thesis has established permanent contact with leading companies in the sector. This technological transfer has crystallized in several R&D&I contracts with international companies, such as Indra Sistemas, EADS CASA Espacio o Thales Alenia Space.

Broadband or “high-speed” access, which has eliminated the need for a land line dedicated to Internet, is possible thanks to the recent launch of new communications satellites operating in the Ka band (in particular from 29.5 a 31 GHz). “The conception of efficient high gain antennas in this frequency band is fundamental for the success of these systems, and so the principal companies in the sector are taking part in this technological challenge”, according to the department head of the Bachelor’s Degree in Engineering of Telecommunication Systems of the UPV in Gandia.

“Communication with a remote satellite requires an antenna with a large capacity to focus the electromagnetic radiation in one direction and that has a reduced volume,” states the researcher in telecommunications. ” Waveguide slot-arrays give rise to flat structures composed of hundreds or thousands of transmitters (antennas), which are characterized by high directivity and efficiency,” states the researcher.

The demanding specifications for the antennas that must communicate with these satellites are met thanks to the broadband optimization algorithms developed during this research. The requirement imposed for circular polarization of the antennas has been solved by the introduction of new elements to conventional slot arrays that were incapable of radiating this type of polarization. Circular polarization consists of the emission of an electromagnetic wave that moves around differently than in the linear polarization transmitted by terrestrial television antennas, for example. This is how the next-generation communications satellites emit, and for that reason it is necessary to design antennas that are capable of receiving these signals,” according to Herranz.

The polarization switching mechanism required in this type of systems has been studied in collaboration with French researchers from the company Thales Alenia Space. “The range covering the European territory has a cellular structure: each zone emits with a different circular direction, to the left or the right; the antenna must be able to adapt to the change in polarization autonomously. This is what we have patented,” clarifies the scientist. As a result, the doctor is taking part as one of the authors of two patents related to SOTM applications, directly related to the designs in this doctoral thesis

The impact of the results of this thesis has been contrasted with the publication of several articles in indexed journals of recognized prestige, as well as the participation in leading international conferences on the design of antennas.