In addition to the many problems that the fishing sector is facing, there is one that has barely been addressed, but which seriously threatens the continuity of small-scale fisheries: generational renewal. This challenge is the subject of the study entitled “Sustainability of the Fisheries Sector in the Valencian Community: the Challenge of Generational Renewal”, by Andrea Márquez, a graduate in the University Master’s Degree in Environmental Assessment and Monitoring of Marine and Coastal Ecosystems at Campus Gandia of the Universitat Politècnica de València (UPV).

The study, supervised by Paloma Herrera, an expert in fishing and the environment at the campus, won an award in the category of Best Final Master’s Project in the 4th edition of the Awards granted by the Professional College of Environmental Sciences of the Valencian Community (CoAmbCV, for its Spanish initials). “Receiving this award is a recognition of the research behind the numerical results and the interviews, in which many people participate. It is also a recognition of the problems that we try to make visible and explain here.”

“The problem is not exclusive to fishing,” according to Márquez, “but it has been occurring for decades in all activities of the primary sector.” “Fishing policies have focused their attention on environmental and economic problems”, which “has contributed to the lack of knowledge and studies on generational renewal and the absence of labor insertion mechanisms to face this challenge.” Once the problem has been defined and the numerical data collected has been analyzed, it reveals that, “by the year 2025 there will be a 35% decrease in the number of crew members and a 31% decrease in the number of boats compared to 2019.” 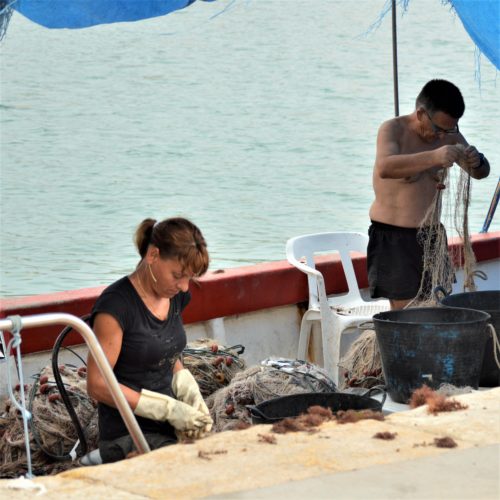 SOCIO-ENVIRONMENTAL REALITY OF THE FISHING INDUSTRY

The research project received inputs from the fishing associations of the ports of Benicarló, Cullera, Dénia, Gandia, Sagunto and Xàbia who argue that, in addition to the structural problems that increase economic instability, “the increasing presence of tourists in the coastal towns, the uncontrolled presence of recreational boats and recreational fishing in coastal waters interfere with the commercial fishing activities that take place closes to shore.” Faced with this situation, “fishermen feel abandoned and undervalued by the Administration,” and, consequently, “fishing has become a rather unappealing job for young people.” Other obstacles identified include “the mandatory establishment of training courses prior to going on board, the paternal-familial nature of the activity, the masculinization of the sector or the preferences for other trades shown by new generations.”

ALTERNATIVES FOR SUSTAINABILITY OF THE FISHING INDUSTRY

Márquez’ study has also proposed a series of strategies that would make it possible to regain structural balance and achieve sustainability in the sector. “There are many measures that have been adopted by the European Union,” however, they have not helped to increase the appeal of the activity to attract the younger generations. For this reason, the study proposes the creation of an appropriate form of cooperativism, establish wages, carry out campaigns aimed at the public and specific campaigns to promote the consumption of fresh fish and seafood, as well as campaigns to make women’s work visible or incorporate the fishing trade in Vocational Training.

Given the lack of specific studies on generational renewal in fishing, Márquez and Herrera continue with their research, extending the scope of study to the entire Spanish Mediterranean, where the possible lack of younger generations could endanger the sustainability of the sector.

Source: Laida Frasquet, Reporter at the Office of Communications at the UPV