The Citizen Platform for the Defense of the Serpis River proposes priority measures for adaptation to global change in the basin from the perspectives of water management, territory and its cultural values. Some of the proposed measures include changes to land use in riverside areas to incorporate them into the river space; the eradication of invasive species, such as reeds, from specific areas and reforestation with native species of riverside vegetation; as well as the revision of surface and groundwater extraction concessions for the correct implementation of an environmental flow regime in the Serpis river basin.

This was explained by the members of the Platform and attendees at the two participatory workshops that have already been held on the REDAPTA project “Spaces of governance for adaptation to global change in Mediterranean rivers”, promoted by CREAF  (Center for Ecological Research and Forestry Applications), whose objective is the development of parallel strategies for global change in the Serpis and Tordera (Catalonia) river basins.

The project aims to address the complexity of adaptation to global change (which includes climate change and land-use change, among others), through the development of spaces for citizen participation (the Serpis Platform and the Taula de la Tordera ), and has the support of the Biodiversity Foundation of the Ministry for the Ecological Transition and the Demographic Challenge, with the collaboration of the IGIC Institute of the Campus Gandia of the Universitat Politècnica de València. Specifically, the Citizen Platform for the Defense of the Serpis River integrates actors from different sectors of interest throughout the Serpis River basin, from its source in the l’Alcoià to its mouth in the Safor.

According to Virginia Garófano Gómez, a doctor from the UPV and researcher for the REDAPTA project, the measures proposed in the workshop would have numerous benefits. “The change of land use on the banks for their incorporation into the river space could reduce vulnerability to downstream floods, since if the river floods certain areas, the floods downstream would be lessened.” In exchange, workshop participants propose offering tax credits to the land owners. According to the researcher, “studying the degree to which the river space has been invaded by species such as reeds (Arundo donax) and creating a priority list for points of action for its eradication, to later reforest them with native species of riverside vegetation, would generate multiple co-benefits. For example, it would improve the evacuation capacity of the channel in periods of heavy rain, in places of great danger; it would create a recreational space for the population, as is the case of ‘La Platja de Potries’, it would reduce the risk of fire on the banks and, in addition, would increase the available water resources since the native species of the river bank consume less water than the reeds, which is an exotic species.” 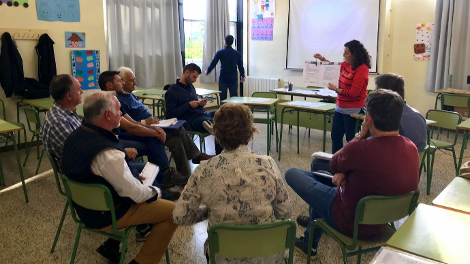 The key to the REDAPTA project is to incorporate citizen participation in the decision-making processes of the administrations. “The governance spaces allow all the actors in the territory to contribute their experiences and knowledge, thus improving the quality of the adaptation measures that can be co-designed in relation to the strategic objectives of the basin. Furthermore, these spaces and the work they carry out can be very useful in decision-making by the competent administrations,” according to Annelies Broekman, researcher in the project.

In the two workshops held so far, around thirty actors from different sectors of the basin have participated, such as agriculture, hunting and fishing, public administration, environmental and social associations, education and science. During the first workshop, a dynamics was carried out in working groups, in which fifteen concrete measures and actions were defined for the seven strategic objectives of the basin according to the different sectors represented. These objectives are related to the quantity and quality of water, pollution, the coastline and river geomorphology, biodiversity, education and outreach, climate change and governance. Subsequently, all the proposals were collected and put into common, grouping the proposals obtained. In the second workshop, the measures have been optimized to ten and have been characterized through a file for each one of them where, among other sections, the problems they address, the objective of the measure, the specific actions necessary to describe are described. implement it, the actors involved in its implementation and the expected beneficiary for reducing vulnerability to the impacts of climate change in the Serpis basin.

According to Francisco Martínez Capel, professor at Campus Gandia and collaborating researcher in the project, the aim of the next phase of REDAPTA is to draw a relationship map between the different proposals and discuss them with the competent administrations to determine their feasibility and synergies and/or conflicts that they may generate with the current regional policies. “We hope to obtain a good response from the administrations and that some of these measures that have been accorded between different actors in the basin could be incorporated into the Action Plan of the new Hydrological Plan of the Júcar River Basin District,” says the researcher.

Lastly, it should be remembered that attendance at these workshops is free and open to all interested persons in the basin. More information about the REDAPTA project can be found on the Serpis Platform blog (https://plataformaserpis.wordpress.com/redapta/).

Text and photographs by Virginia Garófano, doctor from the UPV and researcher of the REDAPTA project.

* The photographs included in this article have been taken before the Alarm State.