The naturalist and sound technician, Carlos de Hita, author of the recently published book Viaje visual y sonoro por los bosques de España (Visual and Audio Journey Through the Forests of Spain), BBVA Foundation Award for Biodiversity Conservation, in the category of Knowledge Dissemination and Communication in Biodiversity Conservation in Spain for 2016, live sound and post-production technician in more than 180 documentaries, gave the Inaugural Conference of the 2019 – 2020 Academic Year at Campus Gandia of the Universitat Politècnica de València on Thursday, October 24th.

The speaker demonstrated the storytelling capabilities of sound, in his lecture entitled “Soundscapes. A Journey Through the Voices of Nature.” And his starting point is always his love of nature. “My work is not neutral, I try to alert people to the crisis we are undergoing,” says the expert. “Over my thirty years of experience, I have witnessed the degradation of landscapes; the impoverishment of the soundscape informs on the gravity of the situation.”

Carlos de Hita states that he considers himself to be more of a naturalist than a sound technician: “You usually get to this profession through music or film. In my case, I got to it through bird songs.” He considers himself lucky, since he has made his hobby his job. “If you don’t enjoy being in nature you can’t convey it well,” he says

Carlos de Hita collaborates with different media outlets and continues to produce the sound for documentaries. He is currently at work on the feature film ‘Dehesa, el bosque del lince ibérico’, (Dehesa, the Forest of the Iberian Lynx), where he is also in charge of the sound postproduction and screenwriting. This is a follow-up to two earlier documentaries:”Guadalquivir” and “Cantábrico: los dominios del oso pardo’” (Cantabrian: The Domains of the Brown Bear). These are the only feature-length films about Spanish wildlife created by teams in our country.

The day following his conference, students in the Master’s Degree in Digital Post Production at the UPV (Gandia) had the opportunity to take a master class from the speaker, with practical training in the Gandia Marsh.

During the Inaugural Conference, the secretary of the Campus  Gandia UPV, José Pelegrí, read the memory of the academic year 2018 – 2019, the year in which the Campus celebrated its 25th anniversary, highlighting the many ways it has grown. Attention was brought to the record figure of 5.3 million euros secured for research, tripling the figure of the previous academic year, 60% of which comes from contracts and agreements with businesses 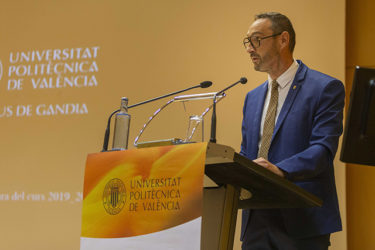 As stated by Jesús Alba, director of the Gandia Campus, the positive evolution has also been demonstrated in the academic program, with the launch of a new Double Bachelor’s Degree in Forest and Environmental Engineering + Environmental Sciences and the approval of an International Erasmus Mundus Master’s Degree program in Acoustics and Vibrations, in partnership with the University of Coimbra and the Université d’Aix Marseille This international Master’s degree will offer scholarships funded by the European Union to the best students who submit their applications. The program will begin in the 2020-2021 academic year.

Alba also highlighted the efforts carried out to expand specialized discussion forums, with new conferences on smart tourism and the environment, “given the unquestionable need to take action in the face of the climate emergency,” he said. These initiatives add to the Comunica2 International Conference on Communication and Technology, an long-consolidated event on the Campus.