Increasing the visibility of women in the fields of science and thinking. This is the goal of the Wise Women conference series, organized by the CEIC Alfons el Vell and Campus Gandia of the Universitat Politècnica de València (UPV), with the support of the Ministry of Education, Research, Culture and Sport of the Generalitat Valenciana. The Gandia Smart Tourism Campus Chair, the Equality Department of the City of Gandia and the CEFIRE-Gandia also collaborate. The series is coordinated by the artist, cultural events curator and essayist, Rosa Mascarell Dauder, who will also moderate the conferences.

The Middle Ages, the Renaissance, the Generation of ’27, women and science and the figure of Marie Curie are the topics that will be addressed in the conferences by renowned female scientists and authors of important works and dissemination activities. All the conferences will take place at the Casa de Cultura de Gandia at 7:00 p.m.. 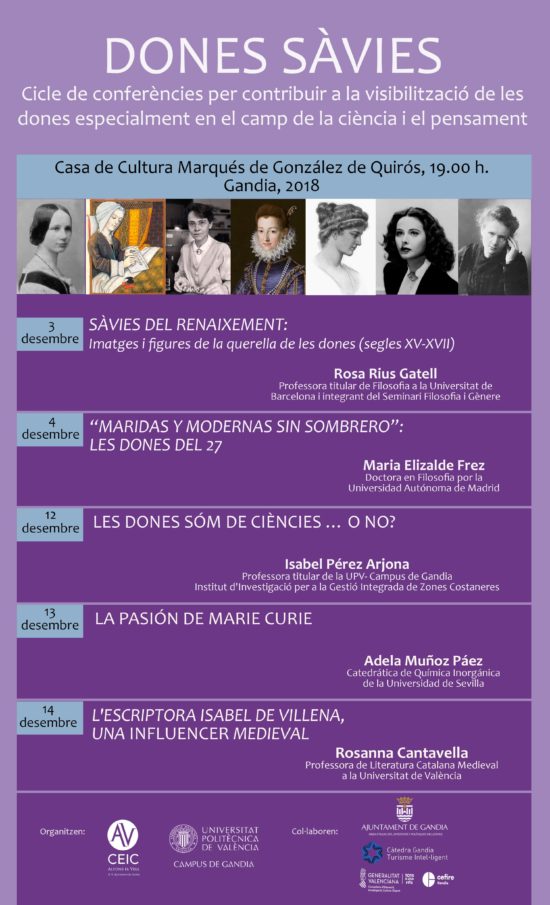 Rosa Mascarell Daudera states that she wants to combat gender bias that influences unfavorable perceptions and expectations towards women in the workplace, as demonstrated in the latest annual report on education by the Organization for Economic Cooperation and Development (OECD). “Women have always been active in all fields of study, despite the difficulties that have historically blocked our pathways, basically the prohibitions of learning and schooling and the block against showing and exercising our knowledge through paid work. We want to showcase female leadership in the world of science, technology and thinking, to inspire women young and old, and reveal a hitherto unknown a part of reality.”

For Jesús Alba, director of the Campus Gandia of the UPV, the university has a social responsibility to fight against gender biases, to encourage and fully develop all the talent, both female and male. “Historically women have endured discrimination that has impeded them from showing their full potential. With this series of conferences we want to contribute to the recognition of their extra effort and to raise awareness about the need to fight the obstacles that still prevent equal participation in the public sphere.”

For his part, Luis Miret, director of the CEIC Alfons el Vell, has shown the commitment of the CEIC through the dissemination of science and thinking and by vindicating the contributions made by women to culture and technological and scientific development.

Lorena Milvaques, deputy mayor and deputy councilor for Equality, Diversity and Inclusive Policies of the City of Gandia, has shown the town council’s support for the initiative: “Without women, society misses out on half of its potential. This is why the City Council wants to encourage initiatives that fight against inequalities and is actively working to eliminate the obstacles in the personal and professional growth of women.”

With the support of: