The dramatic impact of climate change will reduce the amount of available water supply in the Serpis River. This is one of the conclusions of the research project titled “Adaptation to Global Change: Integrated Management of the Environmental Flow Regime for the European Eel and Valencia Chub Habitat Against Invasive Species”, sponsored by the Biodiversity Foundation of the Ministry for Ecological Transition, under the direction of Francisco Martínez Capel, research professor at Campus Gandia of the Universitat Politècnica de València (UPV).

The project features a multidisciplinary team composed of members of the Research Institute for Integrated Coastal Zone Management (IGIC) and the University Institute for Research in Water Engineering and Environment (IIAMA) of the UPV. The Department of Zoology and Physical Anthropology of the University of Murcia (UMU) has also participated.

The research predicts a 28% to 43% reduction in the available water supply in the Serpis River over the next 22-year period (2018-2040), depending on the scenario analyzed. “That is to say that it depends on the implementation of measures to control CO2 emissions,” explains researcher Martínez Capel. 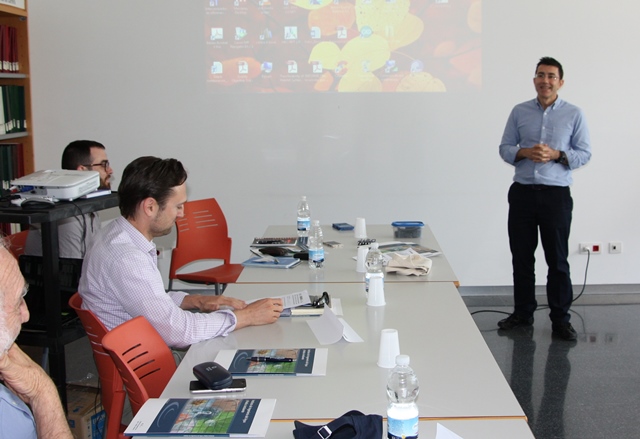 The study proposes measures to improve the release of water from the Beniarrés reservoir, which would improve agricultural irrigation and the environmental sustainability of the river. However, Martínez Capel explains, these measures will no longer be sufficient as the aforementioned period progresses, in which the models foresee a reduction in available water at a far greater pace than these improvements

“Another clear conclusion of the project,” explains Martínez Capel, “is that in order to try to mitigate the effects of climate change, it is important to take measures to modernize irrigation, but this is not enough. Other measures to save water such as crop changes, water reuse and better management of water flows will be essential,” he added

The public presentation of the results took place on June 28 at Campus Gandia of the UPV and was conducted by the director of the IIAMA, Manuel Pulido. Prior to the presentation, the results were discussed in meeting with representatives from the Hydrographic Confederation of Júcar, the Irrigation Association of the Riu d’Alcoi (Lower Channels), the Biodiversity Service and Hunting and Fishing Service of the Generalitat Valenciana, CDR-La Safor Rural Development Center, AEMS-Rios con Vida and Fundación Nueva Cultura del Agua.

According to Martínez Capel, thanks to the participation of various users and entities involved, the final result is more substantiated and adjusted to the current situation. During the presentation of the project results, Martínez Capel said that greater collaboration between research staff, irrigators, associations and administrators is essential to implementing solutions.

ECOLOGICAL FLOW OF THE SERPIS RIVER

The aim of the project was to propose improvements in water management to reconcile a regime of ecological flows for the Serpis River that would bring about improvements to the habitat of native species, minimize the impact of invasive species and maximize the benefit for agriculture. To achieve this, the most advanced techniques have been combined to analyze the habitat in the river, water management and climate change

According to the UPV researcher, Martínez Capel, the medium-term objective of the study is to achieve better adaptation to climate change, that is to say, “to contribute ideas or strategies for improvement that will reduce the costs brought about by the effects of climate change,” he explained.

The project carried out a hydraulic study of a section of the Serpis River and of the flows expected in climate change scenarios, in the short and medium term. ‘The application of an agronomic model allows us to estimate the water needs of crops in these situations where there is less rain and higher temperature. Lastly, a set of equations were applied to calculate the optimal management of the reservoir to minimize the impact of climate change on agriculture and the environment,” explained Martínez Capel.

The main conclusion of the project was the verification that climate change will have a great impact by reducing the amount of available water supply and that the management of the Beniarrés reservoir can be improved to reconcile the environmental and agronomic objectives.

The study also contributes to the advancement of knowledge concerning the habitat requirements of native fish species and their interaction with invasive species, according to the researcher.

The first phase of the project involved field studies of the European eel and the Valencia chub, a species native to our rivers, as well as pumpkinseed and common bleak, both invasive species. According to Martínez Capel, invasive species are a majority in the lower sections, close to urban centers, while the middle and upper sections, near Beniarrés, are dominated by native species, such as the barbel and the eel.