On Friday, March 10th, the IVIO-Universitat Politècnica de València Chair will host the first edition of their Symposium, whose main objective is to show dental professionals the techniques that are transforming the world of oral implantology and periodontics.

The first  IVIO-UPV Chair Symposium, titled “From Planning to execution,” will bring together more than fifty dentists from different parts of Spain. The symposium also seeks to help position the city of Gandia and its University campus as a point of reference in the field of Dentistry. Since its inception in March 2016, one of the founding principles of the IVIO-UPV Chair is the organization of courses and conferences on the Campus Gandia of the UPV, seat of the chair.

The program is an invitation to partake of the experiences of two great professionals, Doctors Pablo Díaz-Romeral and Fernando Franch, as well as learn about the most innovative methods in dentistry and establish a dialog between the speakers and the attendees and brainstorm ideas. The aim of this event is to bring together a sizable group of dentists wishing to update their knowledge in the fields of oral implantology and periodontics. Also, in addition to the scheduled master classes, there will be open Q&A sessions for participants to discuss and debate amongst themselves and with the experts. 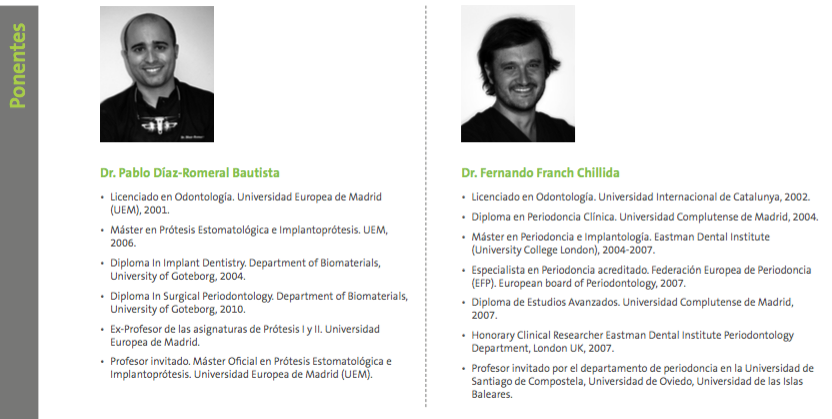 This symposium is aimed primarily at graduate alumni of the Valencian Institute of Dental Research, as well as various professionals in the areas of oral implantology, periodontics and oral surgery. The final program places special emphasis on the importance of proper planning to achieve excellent execution of dental treatments.

The event will take place in the Graduate Hall  of the Campus Gandia on Friday, March 10th starting at 9:30 am and will be inaugurated by the Director of the Campus, Jesus Alba.

The symposium is sponsored by the the Swiss multinational company, Straumann. Straumann is a pioneer and global leader in implant, restorative and regenerative dentistry, with a broad network of distribution subsidiaries and partners in nearly all the major markets worldwide. In terms of the Iberian Peninsula, Straumann has been in business for over 15 years distributing high quality products manufactured in its state-of-the-art facilities in the Swiss city of Villeret. With several million implants placed in the last 15 years and over a 25%  share of the world market, Straumann® Dental Implant System has become the most used dental implantology system  in the world. 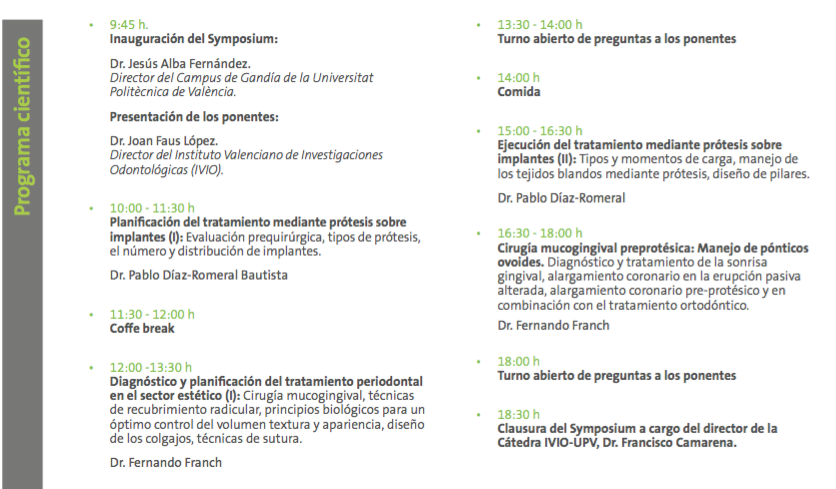 Requests for more information and questions regarding the IVIO-UPV Chair can be addressed in writing to Francisco Camarena, a professor and researcher at the UPV Gandia Campus:  fracafe@fis.upv.es.