The invasion of Portuguese Man O’Wars in the Valencian coast has caused a great deal of alarm. We asked Ainara Ballesteros, researcher at a reference center, the Institute of Marine Sciences (ICM-CSIC), to dispel our doubts. Ainara Ballesteros studied the Master’s Degree in Assessment and Environmental Monitoring of Marine and Coastal Ecosystems at the UPV.

Although the Portuguese Man O’War (Physalia physalis) resembles a jellyfish, in fact it is not. Despite its appearance, the Portuguese man o’ war is not a true jellyfish but a siphonophore, which is not actually a single multicellular organism, but a colonial organism made up of specialized individual animals. The floating sail-shaped structure (pneumatophore) uses wind power to propel the colony, while the submerged structure is formed by translucent, blue-tinged tentacles that can extend as much as 20 meters. Each of these structures has specialized functions such as digestion (gastrozoids), reproduction (gonozoides) and the capture of prey and defense (dactylozoides), the latter through the activation of the irritating urticariogenic cells of the Cnidaria phylum, called cnidocytes.

This species is native to the Atlantic Ocean, so its presence in the Mediterranean Sea is dependent on weather conditions (winds, currents, etc.) that allow certain individuals to enter the Strait of Gibraltar. The Portuguese Man O’War cannot survive high-temperature waters, so the specimens present in the Mediterranean will die with the arrival of summer.

The sting of the Portuguese Man O’War is not deadly. The fact is that there are at-risk groups formed by people allergic to the toxin, people with heart disease and/or elderly or infants, where the sting can lead to complications that put their health at risk. In general, the sting of the Portuguese Man O’War does not lead to death, but causes severe pain to humans, leaving whip-like, red welts on the skin. 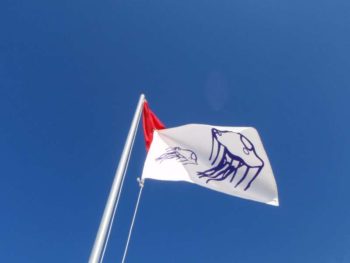 To treat the sting, the tentacles or fragments should immediately be removed without rubbing them, either using a credit card or tweezers. Next, the affected area should be flushed with plenty of sea water (never with vinegar or fresh water) and applied with “hot packs” or submerged in hot water for 15 minutes. Finally, if the pain persists, a doctor or health professional should be consulted

If you have any more questions, the ICM-CSIC has developed the iMedJelly mobile application, which gathers information about the main jellyfish species found on the Spanish coasts of the Mediterranean Sea and the first aid protocols for their stings. In addition, we put bathers in contact with experts in dermatology and toxicology at the Hospital Clínic de Barcelona for personalized monitoring of the stings, either in person or telematically.