Marga Cabrera, director of the CALSI Master’s Degree in Digital Communication at the Universitat Politècnica de València, professor in the Undergraduate Department of Audiovisual Communication at the UPV and co-director of the Comunica2, Social Media Conference, presented her project “Observatory of New Spanish Media” in the House of America in Madrid.

The presentation took place last May 17, World Internet Day, and was retransmitted live via social media. The event could be followed on Twitter with the hashtag #nuevosmedioslatam, where users from the American continent were able to get in on the conversation and ask their questions.

The event was presented by Toño Fraguas, an expert in journalism, and featured Toño Fraguas, co-founder of the diario.es, as an example of general-interest newspapers and a Latin American media icon. Also in attendance was Vice España, as a model of a new international media adapted to Spain and aimed at millennial, with new codes and very innovative storytelling.The event also featured Yorokobu and El Asombrario, which provide innovative niches, both in culture, ecology and ways of understanding life.

According to Professor Marga Cabrera, the project, a live census of new Spanish language media, attempts to collect information about the initiatives being created by the networks created by professionals, where the quality of information prevails. “It comes at a time when there are initiatives arising everywhere, where the best practices have yet to be classified, much less studied. The Observatory will help researchers and entrepreneurial journalists to identify their competitors in the Spanish language, as well as the best practices in terms of business models, initiatives, new narratives and results,” continues the Communications Professor. 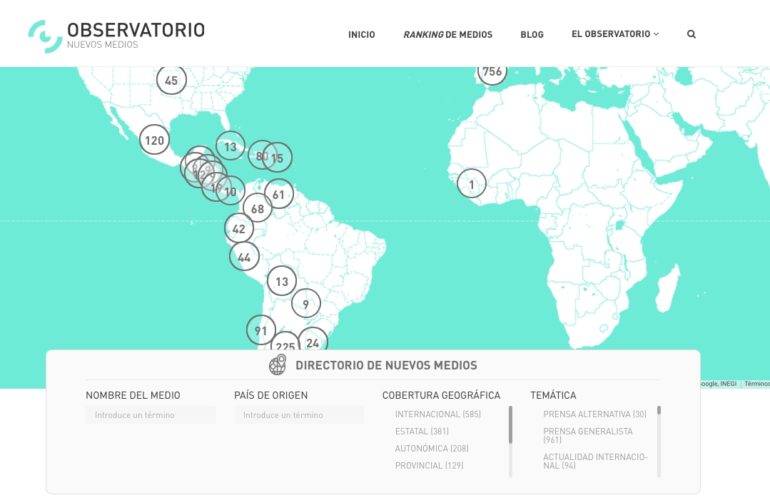 With the data that is automatically extracted by the platform, new info sheets will be created for each media website, including the rates of engagement, reach, amplification, brand recognition, mean emission time, audience growth, lists, history… creating an automatic ranking system based on the analyzed data.

In the words of Professor Cabrera, “The borders in the Internet are often marked by the language, so I want to be able to gather as many initiatives as possible in Spanish, including Latin America and the United States, where Spanish is fast becoming a niche of interest.”