The Campus Gandia graduate, Dr. Noé Jiménez, obtained the highest absolute score in the Extraordinary Doctorate Awards scale 2017 granted by the Universitat Politècnica de València for his doctoral thesis entitled “Nonlinear Acoustic Waves in Complex Media“, supervised by researcher professors Javier Redondo and Francisco Camarena from Gandia. Jiménez holds degrees in Telecommunication Systems, Sound and Image Engineering and in Audiovisual Communication from the Campus of Gandia, where he also completed his Master’s Degree in Acoustic Engineering, as well as his doctoral thesis.

Noé Jiménez has just obtained one of the ten Juan de la Cierva contracts awarded by the Ministry of Economy, Industry and Competitiveness this year in all of Spain. Jiménez will carry out his work in the Center for Scientific Research, where he will conduct research in the field of medical and industrial ultrasound applications. Previously, in 2011, Jiménez won the Andrés Lara Award for young researchers for a study on the administration of drugs via ultrasound. 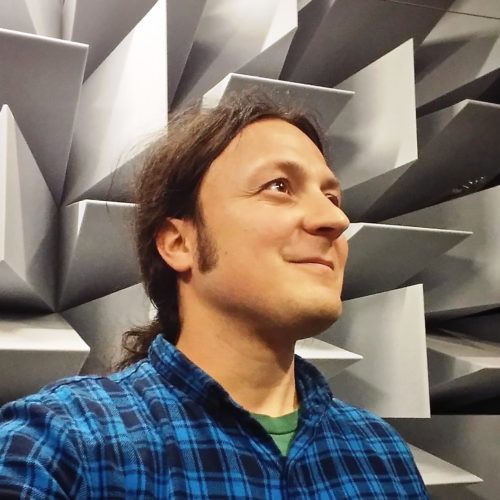 The Campus Gandia researcher is currently working on issues such as noise control with ultra-fine acoustic absorbers in civil engineering; the reduction of noise and vibrations produced during the launching of space rockets; design of new modalities of medical imaging by elastography using non-linear radiation force and the application of ultrasound in the central nervous system for non-invasive administration of drugs. “The applications of the fundamental concepts studied have the potential to contribute directly to the improvement of people’s lives,” says the scientist.

In his research, Jiménez addresses the nonlinear propagation of waves in complex media: ‘Nature is nonlinear. The linear description of physical phenomena is very useful in explaining our observations with simple mathematical models, but these are only accurate in a limited range of validity,” he explains. “In the case of high-intensity acoustic wave, linear models obviate a wide range of physical phenomena that are necessary to accurately describe high-amplitude waves, but are also necessary to explain other more exotic and indispensable processes to develop new applications based on non-linear propagation,” he says.

Noé Jiménez explains that the study of non-linearity permits the characterization of acoustic wave propagation in a much more precise way, in a way that increases the precision of existing techniques with particular applications, such as Civil and Aeronautical Engineering, Chemical Engineering, Life Sciences, as well as in Medicine, in the field of ultrasonic therapy and medical imaging.

“For example, knowledge of the non-linear dynamics of biological tissues under the action of high-intensity ultrasound allows us to optimize existing elastographic imaging techniques (used in the detection of tumors, among other cases): by increasing the precision in the estimation of tissue elasticity, the accuracy of medical diagnosis based on these images is increased. urthermore, control over non-linearity adds a further degree of freedom.  Thus, new diagnostic techniques and medical treatment can be designed, based on the estimation and detection of nonlinearity of systems”, says the researcher.

In his thesis, Jiménez studies the interactions between nonlinearity and other complex processes such as non-classical attenuation, anisotropic dispersion and periodicity and diffraction in specific configurations. For this, he analyzes the vibrations of nanometric-scale solid-state crystals, acoustic waves in artificial structured media and metamaterials, focusing of ultrasonic waves through lenses, and, finally, propagation of non-linear acoustic waves in biological tissues.